Dan Q is a Hip Hop artist from Newport News, VA. His music heavily reflects honest and elite lyricism, doused with storytelling and creativity. While signed to Hip Hop icon and New York native, Cormega, Dan Q is currently working on his debut EP titled, “Buddha Statues and Herbal Tea.” Dan Q has performed alongside Cormega at shows in California and Chicago, as well as traveling to Africa with him.

Listening to the single, “Buddha Flow ft. Xolani Jane”, it’s hard to realize why Dan Q is not more well-known, as he brings you into a focus realm of knowledge and flow in the track. Quite possibly Dan Q has shown that he is more concerned with the message than the fame, even though he deserves more. Dan Q has always been a great emcee, but hasn’t yet had the marketing power to give him the push he needs. Artists like Cam’ron, and even Cormega experienced this situation before him. 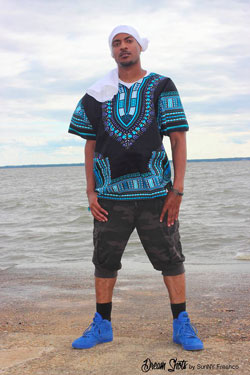 Dan Q showed huge potential with “Can I Have You?”(feat. Chenell) released last year. Here with “Buddha Flow ft. Xolani Jane”, he does even better, to confirm that initial assumption. This is by far, his best release so far. Both the lyrics and beat are stepped up a notch compared to past efforts. This track is surprisingly near perfect. I would say it’s perfect but no one’s perfect and we all know that. But the way the lyrics hit the track and the classic soulful beat is just plain cold!

This dude when he rhymes comes through as very intelligent and smooth. Every time he speaks there is something to be remembered. He is comfortable in his own skin; you can hear it in his songs. From what I’ve gathered so far, I can say that I like his style; clothes, attitude and his view on life.

I also like Dan Q’s rhyme style, the guy is deep and he is on another level compared to the majority of emcees dropping their trash today. To put it all into perspective the industry should be much obliged to give an artist like Dan Q his fruit. Hopefully he does not become a victim of commercialism the game displays continually. Given the chance Dan Q could be head of his class!