The Brooklyn, New York based NeoSoul/R&B/Fusion band released the video clip  for the single “Que Mae Mas Raro” (translates as “Weird Dude” from Spanish) and which was shot at Terminus Studios in Times Square while the band recorded the song. Mostacho Xprmnt was founded by Costa Rican drummer and composer Andres Marin and consolidated in 2013 in New York City with Eitan Akman and Haruka Yabuno. 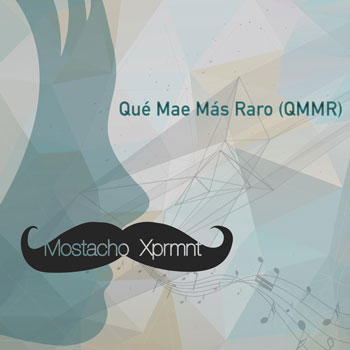 According to the band, the song “Que Mae Mas Raro” is an ode to weirdness. Its music is based on a 12-tone atonal composition style and the lyrics, written by Malaysian songwriter Najwa Mahiaddin and Costa Rican composer Andres Marin, reflect the limitations of judgment and tolerance.

With a voice that can bend and soar then suddenly rattle the floor boards, Songyi Jeon transcends the okayness of regular pop songs and together with the band makes “Que Mae Mas Raro” so much better by sheer inventiveness and embellishments. She utilizes her instinctive sense for improvisation and unique vocalizations.

Songyi has the uncanny ability of stretching words while simultaneously implying instruments other than the human voice. She draws a corollary between the voice and instrument where a word implies a percussive beat or the refrain of from a guitar bending a note. In the midst of all this she maintains soulfulness, a funkiness and emotional accessibility. Don’t just take some of this for granted, listen closely.

Likewise, the band excels at controlled and understated excellence. There is no need for them to prove anything with hyper intense chops and technical blowing. It is just perfect, correct playing of the highest order.

This track starts out subtly, but halfway through becomes more animated and engaging, though never overwhelming or with too many layers of sound. At the same time there are many different textures of sound to enjoy. Through headphones and with a nice glass of wine at hand, you will hear a young band that sounds better than practically anyone else in fusion right now.

Sure to please the most discerning music lover’s palate, every note, of “Que Mae Mas Raro” is a carefully crafted, meticulously labored offering that these five, divinely gifted artists have lavished upon our insatiable, never-ending desire for tasteful, intelligent and technically proficient music. It is a fine achievement marked by flair, skill and an unswerving devotion to each member of Mostacho Xprmnt’s specific craft.