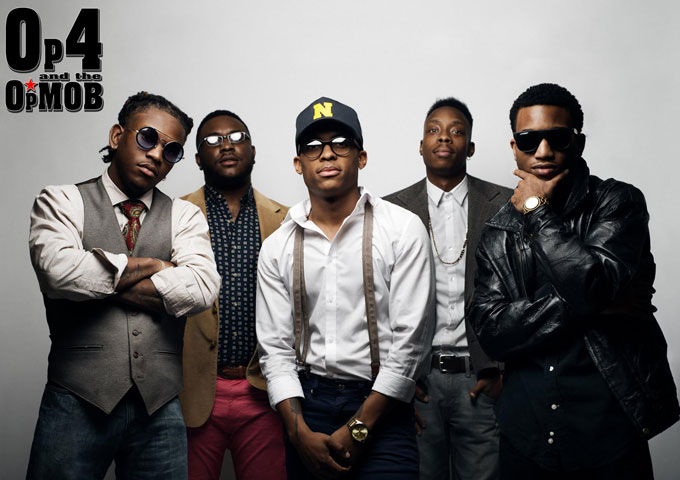 The OP4 and the OP Mob features a keyboardist, guitar player, bass player and drummer, with OP4 delivering rap vocals over tracks that define genre limitations. The band’s burst into the spotlight has been rather rapid. OP4’s controversial music video for “No Fucks” exploded on Reddit, landing him features on major music publications. Now the collective have released “The West Egg Vol. 1” album to give us a taste of things to come. The album’s production is majestic, aiming squarely for the skies. The atmosphere is lush, full of period ambiance worthy of a high-end high fidelity sound system set, while the tracks are embellished with intricate details throughout. These songs dig into something that feels unique to your mind, not just your record collection.

OP4’s is that he is skilled enough to figure out how to excel at something, and, for the most part, look like he knows exactly what he’s doing. As a rapper, he sounds the part: Take a step back, and there he is, rapping fast, switching up flows, and delivering punchlines.

Zoom in closer, and he’s delivering sharp-witted lyricism that cuts like a razor blade. Any fan of the genre should agree that OP4’s emotional performances prove fascinating, even if you aren’t into the content he’s using that power to convey.

Part of the genius of OP4 and the OP Mob is that they often write on two levels. You got fiery direct words for life on songs, but there are also times they stash hard-hitting socio-cultural commentary inside seemingly straightforward lines, where the bite is a whole lot bigger than the bark.

Add to that the easy pliability of the musical accompaniment which suggests that the team of background players have been put to their best use making bits of eclectic sonic things for OP4 to rap over.

These songs feel like the result of a group having fun while making music that matters to them, not some squad designing pop-radio nuggets as battering rams to try and storm mainstream hip-hop’s gates. This guarantees plenty of creativity and spontaneity, making “The West Egg Vol. 1” a real easy and interesting listen for the open-minded fan.

But beneath the hood of any smooth ride, there is always an engine working harder than it lets you believe. So while and your crew are lighting up and chilling to this stuff, on the other side of the boards, OP4 and the OP Mob have been grinding their butts off to create essential masterworks such as “No Fucks”, “Becky”, “The Door”, “No Fake Friends”, “My Big Fat Ego”, “Oppression For Men” and “2 Weeks”.

This album signals an exact meeting point where cerebral grit meets all-body-blows rapping and live instrumentation. “The West Egg Vol. 1” is an ominous gray-cloud to full-color-rainbow commentary, on everyday experiences and situations running the gamut from the conventional to the grotesque. And that gets a severe tongue-lashing from OP4 and the OP Mob.