The Coney Island, Brooklyn-based band Newborn was formed by  high school friends Allen James (vocals/guitar) and Eric Weglicki (guitar/bass/vocals) and a love of rock spanning from Metallica, Nirvana, to Muse. After many years of jamming together they decided to form a band. Newborn played their first show December 2014 which was followed by the release their debut EP “Broken Virgo”. The band has since evolved musically, adding drummer Dave Goldenberg, and going from strength to strength, culminating in the release of their latest single, entitled “Honey Trap”. The song features Newborn’s most diverse lyrical palette to date.

The result is a cohesive, Indie-Pop flavor marked by James’s distinct voice and melodic composition. Unified by their singular vision, the band creates a sound that is a both familiar and nostalgic nod to the mainstream radio charts. The song is as much a resounding nod towards female empowerment, as it is a wake-up call to the workings of the music industry and its hype machine.

“Honey Trap” is an understated and charming production of acoustic driven indie rock, pop riffs cresting a summery melody and shimmering streaks of reverb. It even includes a just-about-danceable dash of rhythm with a glammy hook in the chorus. 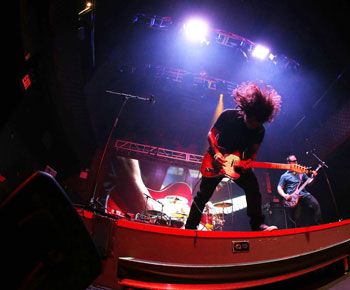 The way Allen James sings throughout—the break in his voice, the curve in his lower register to the ache at the top—is just as interesting as what he’s singing about.  The song is also an excellent example of how one tastefully adorns a clean-cut mid-tempo pop-rock song with studio wizardry without plasticizing its emotions or chilling any of its warmth.

The track has a catchy, elegant melody almost reminiscent of a variety show act, as it plays out the storyline. The guitar and drums also go to interesting places during the song. The chances the band took here with this molten smooth sound are obviously aimed at creating opportunities for interesting, unexpected moments in the foreseeable future.

The soothing, warm melody, or the band’s clever narrative – the combination is something of a perfect alchemy – the apex of the track’s desire seems to want to stretch Newborn’s sound further mainstream than anything they’ve ever gone before. The most appealing thing about “Honey Trap” at the first instant is Newborn’s ability to create such a remarkably pure melody…very pure, indeed as pure as anything the Beatles have done.

All things said, Newborn have cleverly crafted various eras of music into a short, three-minute song, without sounding like a rip-off of other band. They have merged idiosyncratic creative spark, with cool, connected, song-craft.

Of course any change of direction by any band will always challenge their fan-base who will inevitably have contrasting opinions about any evolution regardless of the direction taken. I suspect that once Newborn hit the high-end of the charts, that any potential debate will be over!