LATEST NEWS
GMT+2 19:14 PM
Home New Releases Kevin Riady – “Not A Love Song” – All of the core elements that make up the singer-songwriter’s skillset are present

Kevin Riady’s latest single, “Not A Love Song”, is exquisitely entrancing to listen to. The singer-songwriter has emerged with a song that is so raw and authentically fragile, so beautiful and painfully melancholic that it’s impossible to listen to it without being genuinely moved.  The whole tune is both hauntingly intimate and intensely epic, as it moves from a plucked acoustic guitar and cracked, wavering vocals to gently swelling emotional magnificence, with Kevin crooning stunningly heart-wrenching lyrics above it all.

“How do you mend this broken wing? When you say a man can’t grow out a limb. How do you mend this broken soul? When the world just keeps throwing out a drôle. Oh love’s not easy. Life’s not easy. For me,” sings Kevin Riady in the chorus, with all the complexities of his existence wrapped poignantly in those lines. All of the core elements that make up the singer-songwriter’s skillset are present. Kevin’s lyrics have always had a cinematic quality, but “Not A Love Song” takes that to a whole new level. 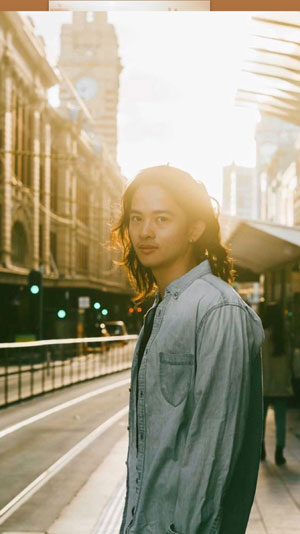 In his trademark soulful croon, made of subtle beauty laced with sorrow, Kevin Riady sings of a fear of not finding the perfect equilibrium in his life: “I’ve been wandering the plains and the oceans. Hoping once I settled I’d find the answer. I’ve been trying all the dresses out for sale. But guess I’m not supposed to get one yet.” “Not A Love Song” thrives in these intimate moments, stripped down to Kevin serenading with an acoustic guitar in hand, and little else in the background to distract the moment and mood.

“Not A Love Song” is tightly crafted. Kevin Riady is equally capable of softening your heart with a groundswell of cultivated acoustic guitar, or with his mellow voice punctuating the atmosphere.  Though this record feels raw, and intimate, it is much bolder in its sentiments and statements, than appears on first listen. This song once again proves that there’s nothing quite like an existential crisis to stoke the embers of a great new track of music.

Lyrically “Not A Love Song” is a stab to the heart. Melodically it’s gorgeous, both on guitar and vocally.  It is a rich song thematically, and is meant to be savored and taken in with repeated listens. Moreover, it is best unearthed on the intimacy of headphones, where its soulful style, harmonic flourishes and warm acoustic guitar sets it way above the work of Kevin Riady’s genre contemporaries. The underlying emotional weight, the heartfelt lyrics, and incredibly moving vocal performance, all add to that claim.

For those still naïve about Kevin Riady’s roots – he was worn in Jakarta, Indonesia. He completed a degree in Human Factors Engineering and worked as a consultant before he finally decided to pursue his artistic aspirations. For many years, he considered himself a natural singer, however due to an unsupportive environment, he decided to hide his voice and instead picked up the flute in 2011.

By 2013, Kevin was the flute principal of ITB Student Orchestra, then in 2015 he suffered from a chronic TMJ disorder and cervical spasm, which prevented him from pursuing a professional career as a flautist. Kevin stopped playing music for a while, until he joined an acapella group and competed in the UK Voice Fest 2017.

A year later he began writing songs and learning how to play the piano, the guitar and produce music. He then relocated to Melbourne, Australia, and has been rewriting his musical career ever since. “Not A Love Song” is the next chapter in his story.