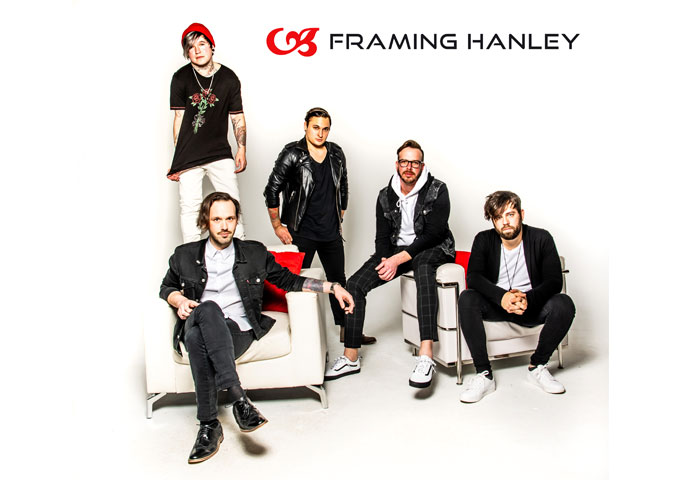 1.5 million downloads, over 150 million digital streams, and in excess of 40 million video views, certifies that Framing Hanley are not your simple garden variety of rock n roll band.  Kenneth Nixon (vocals), Ryan Belcher (guitars), Jonathan Stoye (bass), Shad Teems (drums) and Nic Brooks (guitar) make up the reformed Framing Hanley who release “ENVY” – their first album in 6 years – via Thermal Entertainment on 2-21-20. Believe the hype, this album is extraordinary from start to finish. “ENVY” is the right place to start if you are at all interested in hearing this incredible band. Not one weak song in the bunch. No filler.

Framing Hanley is a band that you’ll find difficult to categorize. They take elements of classic progressive rock and fuse it with modern alternative rock, adding in electronic and rich orchestral flourishes. So what does all this mean?

It means Framing Hanley is a great band who are creating some of the freshest and adventurous, yet accessible rock music out there today, and which could easily sit in the higher echelons of any mainstream chart you dare to mention.

Like potential lovers who look into each other’s eyes for the first time and know that they have found their match, Framing Hanley hits you straight in the heart and never lets you go. Once you have picked up your dropped-jaw, after hearing the album’s opening intro track, “Say You Ever” for the first time, you will take a second to realize that you have found the pot of gold on the other side of the rock n’ roll rainbow.

Atmospheric, slow and steady, the previous track leads towards the chugging guitars which explode into the soaring “Bubbles”. The strong lyrical content, consistently effective and amazing vocals, and technically superb guitar and bass lines are the reasons you’ll keep popping this album into the player. On this recording, Kenneth Nixon wails with an authority that leaves little competition.

The rhythm section and the guitars keep up with him too: whether the tune is dark and damning as “Misery” or bright and soaring as “Joke’s On Us” which starts quiet and rather minuscule, before building to an incredible sound that brings an ear-shattering euphoria.

“Forgiveness Is An Art”, “Puzzle Pieces” and “Maeve” take the listener on three incredibly journeys, that bring a powerful identity to a very multi-faceted record. Squealing guitars, driving rhythms, falsettos and full-throated harmonies abound, all wrapped up in superb production and breathtaking arrangements.

Framing Hanley really strikes me as a group that are not scared to push boundaries with vocal range, sonic design and orchestral flourishes, and this album showcases them at their full potential. They’re bold and adventurous, experimenting with their sound and reaching new heights.

“Carousel” sets up the rest of the album with precision and purpose, before giving us a masterclass in stadium shaking bombast on “The Way Down”. “Throwing Knives” takes the band into power ballad territory, where they turn down the tempo, but not the intensity.

Framing Hanley are not only tremendous musicians, but also inventive songwriters, who know how to turn out catchy, pop-inflected rock grooves – which is what they achieve on the radio-ready “Counterfeit”. There’s a strange change of ambience on “Baggage Claim”, which is weaved with crystal-clear pop and Americana threads. This is another one for the radio programmers.

All in all, “ENVY” is consistent and accomplished, and it tops just about everyone else in the spectacle department. It leaves the listener intrigued and entertained all at the same time. And it does this much better than any other album of its kind I have heard in the last couple of years.