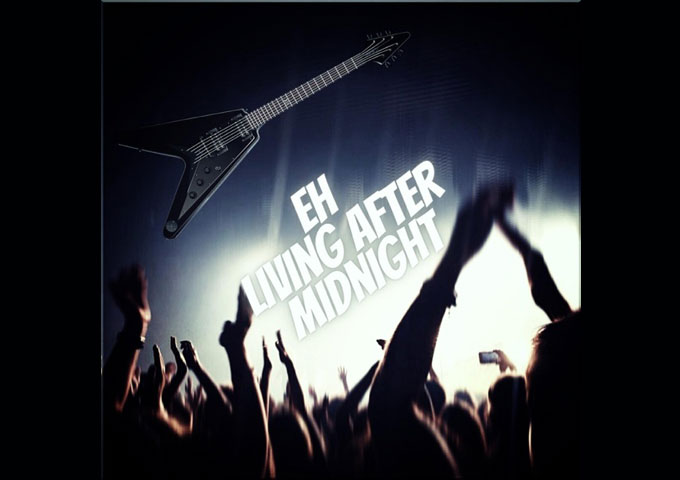 During 1980 British heavy metal band Judas Priest released their 6th album, “British Steel”, which was their first gold album in the USA. The project produced 3 hit singles, “Breaking The Law”, “United” and “Living After Midnight”. This latter track which speaks to the hedonistic, rebellious spirit of the late 1970s and early 1980s, is among the band’s most popular songs. The song has become a standard metal classic, and still holds up decades later. In fact 40 years later, Baltimore rocker and guitar ace, Eric Hall aka EH, has picked up on the song, putting it through its paces and including it on his latest album.

EH, however, didn’t just settle on simply covering the song. He engaged former Judas Priest vocalist Tim “Ripper” Owens, who actually took over as lead singer, performing and recording two albums with the group, between 1996 and 2003. Owens has also had stunts in Iced Earth and Yngwie Malmsteen’s Rising Force, among others. With some astute and subtle, yet decisive creative adjustments, EH’s cover version of “Living After Midnight” is a triumph. Irony of sorts is that Tim “Ripper” Owens was also the lead singer in a popular Judas Priest tribute band, so the man knows exactly how to perform Priest songs, from ‘inside’ and the ‘outside’, so to speak. Together with EH, the two bring brimstone and fire to “Living After Midnight”, while retaining all of the song’s easy on the ear catchiness. The track boasts the quintessential Priest qualities, while adding those of EH.

From the blistering drum assault to the majestic wall of overdriven guitars, “Living After Midnight” is tightly packed with an indomitable rhythm and pile-driving riffs. The perfect blend of past, present and future coalesces into a monster track, where the undeniable power of Tim “Ripper” Owens’ pipes soar into infinity.

This is a true Priest classic in every sense of the word, and the EH cover version does it full justice. If for some obscure reason you have never listened to Judas Priest, this is one of the best introductions you can be given.

It’s clear that from the moment he started recording, EH knew he was creating something special. “Living After Midnight” has the power and energy of a live recording, as he brings in a touch of technicality that sounds absolutely fantastic.

This is much more than just another milestone in the rock and metal universe. It’s hard to find complete, exciting and powerful rock music of this caliber these days. That’s probably why EH dug into the crate to pull out an all-time classic.

The riffs to “Living After Midnight” are melodic, blistering, and will definitely make you air guitar along. It has a memorable tune that you’ll keep rocking to in your head for hours. Moreover, this track really showcases the know-how of EH himself. Of an artist centered on himself and confident of his capabilities.

This is the type of performance that puts EH in the conversation. So, in conclusion, “Living After Midnight” is one of the best and most authentic covers of a Judas Priest track so far. It is something you should most definitely own.