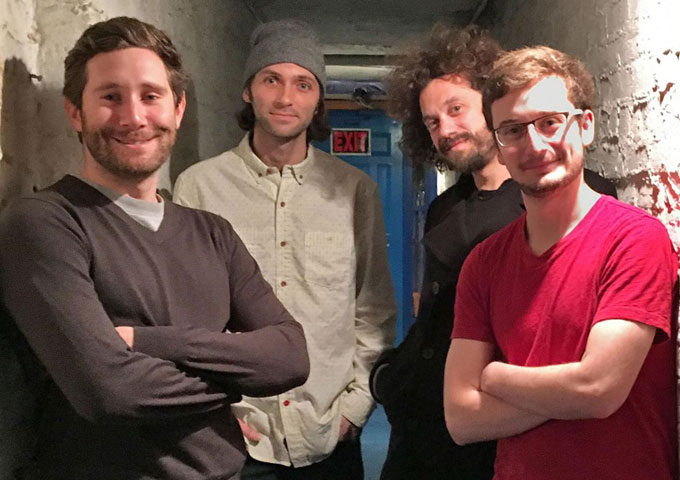 Interview: Sugardown release their 5-track EP “Our City Our Scene”

SUGARDOWN: Sugardown formed when songwriter Jason Zucker and producer Julia Cassia teamed up to record an EP, “Pieces of Yesterday,” in 2012. We had worked together for the first time back in 2007 as The Exclamation Brothers. We also worked together on several of Jason’s film projects, with Julian composing. We recently released our second Sugardown EP, “Our City Our Scene,” and we’ve put together an incredible band to play the songs live.

SUGARDOWN: Jason, whose last name means “sugar” in German, came up with the name. He liked the sound of it. It is not trademarked.

SUGARDOWN: We are an indie rock band…

SUGARDOWN: We love making albums and playing shows. As long as we can continue doing those things, we will feel like we are achieving what we set out to do.

SUGARDOWN: We love connecting with fans more than anything. While we love being in the studio, the ultimate payoff is playing in front of people who love our music.

SUGARDOWN: Jason writes the songs in the band. Julian brings them to life in the studio. We want to inspire people with our lyrics and so we talk about love, having fun, relationships, and feeling positive about life. “Our City Our Scene” is about being connected to a music community and falling in love with a band.

SUGARDOWN: Julian is a composer, arranger and multi-instrumentalist, and is the one who works his magic in the studio. He records Jason’s acoustic guitar and vocals, and then writes and records the rest of the parts on his own.

SUGARDOWN: The title track of of our new EP, “Our City Our Scene.”

SUGARDOWN: Success is being able to put out albums and play shows without losing any money. Really successful would be making money!

SUGARDOWN: We like being in control of our careers and making our own decisions. We don’t have to answer to anybody but ourselves. However, we don’t have access to the resources that a label could give us.

SUGARDOWN: We market our music by playing shows and connecting with fans over social media. Currently, we don’t have a management team.

SUGARDOWN: The best piece of advice that we’ve gotten is that things don’t happen overnight. It is important to be patient and just focus on what you actually have control over. As long as we keep putting out new music and playing shows, something good is bound to come of it.

SUGARDOWN: “Our City Our Scene” is on Spotify, iTunes and Bandcamp.

SUGARDOWN: Yes, social media is a huge part of what we do. We use it to connect to fans and meet new ones. We love technology and try to use it to our advantage.

SUGARDOWN: It is hard to stay of streaming services like Spotify, because that is a great way for people to discover us. We hope that people who stream our music for free will support us in one way or another.

SUGARDOWN: The idea of millions of people hearing our music is what fires us up the most. We want our music out there and listened to, nothing else matters really.

SUGARDOWN: We would never give up creative control of our music. As long as we are making the music that we want, we will be happy.

SUGARDOWN: Please check out our new album, “Our City Our Scene.” Thanks!