LATEST NEWS
GMT+2 15:26 PM
Home Reviews There is a quality of anti-gravity in the music made by Phoenix Lights

Phoenix Lights is a Netherlands art rock duo formed in September 2013. During 2014 and 2015 they played at a variety of venues throughout The Netherlands, Belgium and Germany. Phoenix Lights are Sandra Spaceflower Zovko (vox/keys/guitar) and Laurens Voois (vox/guitars).

Phoenix Lights released their 6-track, self-titled debut EP, in December 2015. The uniqueness of this EP’s lyrics, instrumentation and structure is eclipsed and made totally irrelevant by the absolute beauty and vision of the work. An essential album, it is not a curiosity, not simply weird or quirky; it’s a masterpiece: a complex, lovely, and intelligent combination of words, sound, and atmosphere. Though the duo boxes their genre into art rock, the style of the music is indescribable. The overall atmosphere is foreboding and surreal, while it’s best moments go beyond mere atmosphere and into the sublime – as in the stunningly infectious, and mesmerizing “Hesitation” and in the deeply moving final tracks, “End Of Summer” and “Games”. 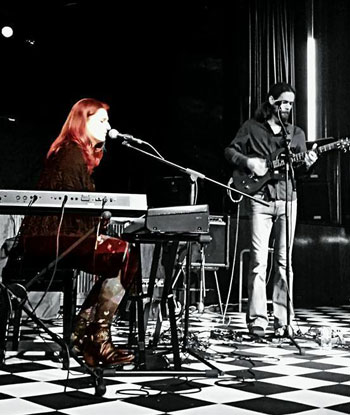 After listening to these last two tracks, you might discover that your feet are no longer touching the ground. There’s a quality of anti-gravity in the music. It’s easy to appreciate Phoenix Lights solely for their intriguing writing while forgetting to notice the role played by the performance of the music and voices.

The music on this EP is full of striking sounds and imagery and at its center the delicate pianos, together with the warm and crisp guitars, and oh yes I do love Sandra’s voice. Phoenix Lights will literally open your ears to a whole new musical world. The compositions throughout the EP never grow stale, pushing into leftfield territories with a fearless and free-spirited abandonment that is more about creating art than selling records.

There is just something so alive about this music, something that I can’t put my finger on, that gives it a spark like it is a life in itself. The intensity and meaningfulness of the instrumental music alone is enough to demand respect from any attentive listener.  Throw in Sandra’s incisive and provocative vocals which imbue an even more lucid sense of atmosphere into the music, and you may lose yourself entirely within the confines of these tracks.

Each individual track weaves itself between beautiful, expressive performances by two creative aural artists who never cease to delight and amaze. The sensitivity I feel that has gone into this EP is one of the things that struck me the most on the first couple of listenings. There is something about the music of Phoenix Lights that transcends the time they write about. It is like Sandra and Laurens were born on another planet and have spent their lives here trying to understand life on earth. Overall, this is definitely a work of art beyond the confines of pop culture.