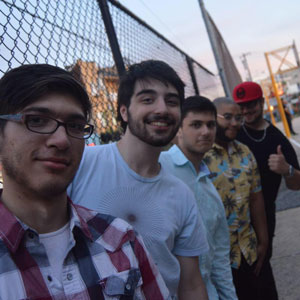 Instead of worrying about mundane and trivial things in life, they try to live life as if there was no future – as if death could come and greet you at any given time in your day to day life. NoFuture conclude by exclaiming: “Only by embracing the immediacy of this spirit can you actually truly focus on the important things and start feeling more in every way.”

NoFuture has quite recently released its single, “MayFair”, where through the lyrics they bring out the darkness and suffering of what sounds like themes of rejection, diversity, introspection and depression. They paint a vivid image of a despairing situation which will resonate with listeners who can empathize with such feelings.

The track embraces an edgier, grittier side of rock, within which the band forges a refined sound, reaching an incendiary intensity and swing during the choruses.

Yet, throughout this refined sound there is a rawness which makes the recording feel live and crispy, as NoFuture go for a jangly guitar feel during the verses and crunchier feel with a fierce assault of heavy guitars riffs in the chorus section, supported by a groovy bassline alongside the catchy and memorable melody.

Vocalist Arturo Burgos alternates between a fair amount of melodic restraint and throwing himself into intense abandon during the soaring sections of the song.

Built on a mid-tempo rhythm tempo, “MayFair” delivers some great sounding guitars. Fiery twin-guitar assaults never fail to captivate the audience throughout the song, mixed with the organically expressive vocals.

The song projects an all-round charismatic performance, combined with moving lyrics and strong imaginary, full of emotion and heavyhearted soul-searching. NoFuture do what they do very well, making it really difficult not to like them.

They are able to sound hard with a rock edge, yet manage to maintain a melodic alternative quality to their music. The catchy and addictive twist that rules “MayFair” also has an extremely mature nature to it, which is simply awesome for what seems like a young and upcoming band!