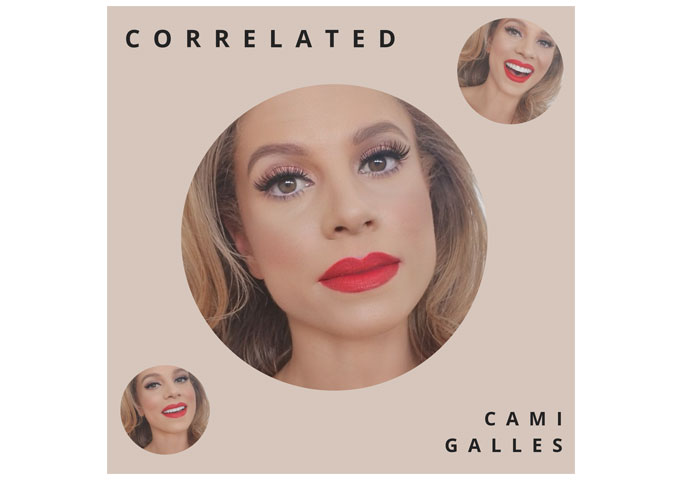 Cami Galles has known since the age of 4 she was here to sing. Yet, over the years, she’s succumbed to her own fears and yielded to the misguided directions of others. In December 2018, while in Bali, Cami nearly died, and from her hospital bed the Chicago-based artist vowed if she survived she would finally release her debut album.

On October 15th, she keeps that promise and issues her first-ever album, Correlated. The 8-song record will be available for digital sale, download and streaming worldwide on Spotify, Apple, GooglePlay, Amazon and 102 other digital platforms.

“In this life, we arrive and leave with our selves. Everything we have and do point back to our relationship with ourselves,” Cami shares. “This album tells an evolutionary story about my past relationships, and how I learned to prioritize my relationship with myself.”

For years, Cami has dazzled audiences in New York and the Midwest with her invigorating “future blues” aesthetic—a singular melding of blues, pop, jazz, enlightened and empowered lyrics, and uptempo dance beats. Now, her inaugural solo release proves her to be a masterful songwriter, producer, and singer.

Correlated documents a triumphant rise of the authentic self, and it’s threaded with raw truths culled from years of dealing with disappointment, pain, damage, heartbreak, prejudice, and fear. Throughout this collection, Cami’s lyrics brim with bold vulnerability and playful swagger.

The album’s leadoff single, “Liar,” explores a humorously seething narrative of a boyfriend getting caught exploring “extra-curricular” activities. Driven by a rollicking piano-melodic figure and an infectious beat, the tune comes off like empowered anthem rather than a heartbreak lament. “If you think the person you are seeing is up to something they probably are,” she warns. “Don’t waste your time trying to change them—keep moving—the right one will come along soon enough.”

“Liar” will be followed up by the single “Sugar Baby.” The crushed-velvet disco strut and dance-pop production of “Sugar Baby” make it an undeniable club banger. Beneath the fizzy exterior of “Sugar Baby” is a lesson in self-love and being direct in romantic relationships. “It’s the all-year-round opposite of ‘Santa Baby,’” Cami says slyly with a good-natured laugh. Another album standout is the ethereal ballad “God Only Knows.” Here, the song’s sparsely elegant musicality, and poignant lyrics and soulfully emotive singing, make it feel like a prayer in song. Cami confirms: “That is the song version of the vow I made to myself to get my music out there after my near-death experience.”

Cami was born and raised in Kansas, but came into her own as an artist in New York City. She brought Big Apple grit with her when she relocated to Chicago. Cami’s a fierce and charismatic performer, actively gigging regionally and nationally.

Stay up to date on all things Cami-related, including shows, music, and more at www.camigalles.com