Chad Rico is a budding hip hop artist with a curriculum vitae of epic proportions. His new single release, “New Level,” on his label Gold & Gems, is not just a repetitive song refrain but a bold declaration from a music artist who is also a college math professor, entrepreneurial clothing manufacturer/designer, filmmaker and world traveler! “New Level” the debut single from his upcoming EP, titled “Myth,” is just the tip of a very deep iceberg from a young man who has been making mad, mythic moves since the age of three! The seven track EP is a collection of rap songs as varied as the 35 countries the 31-year-old has visited and reflect the flavor of his nuanced experiences. A Belizean American, Chad’s legend began at birth when he was born in South Central Los Angeles, in the same hospital and at the same time as Grammy Award winning artist Kendrick Lamar. Currently repping for the Bay area, Chad’s family relocated to Northern California where he now resides.

Chad Rico: Well before everything I made music. If anything it was taking the time to put together a whole project. With all my endeavors it has given me a lot of experiences which I express through my music.

Chad Rico: I’m too creative to be exclusive, however as I do plan to integrate, you will see my clothes and hear my music in my films. You will also see some of my clothes in my music video. I can’t do everything at once so one thing I have put together is a marketing team which allows me to focus on my creativity because that is my passion, which includes both the musical and visual experience. 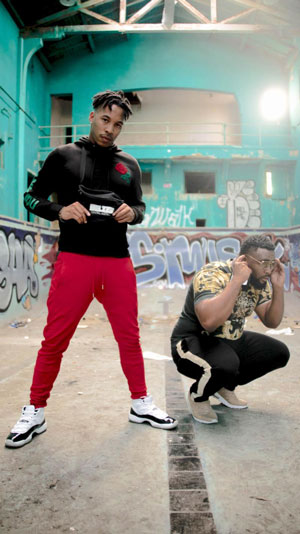 Chad Rico:  MC Hammer as a child I thought his name was EC Hammer, then Snoop Dogg and Dr.Dre and of course Tupac. Its funny, out of all the songs Too Short made, the first I remember was “Getting It” and that stuck with me. Also Parliament P-Funk – my dad played that all the time. Snoop stood out to me because when I was young his voice is what I associated with cool.

Chad Rico: I think positives vibes. My music deals with my personal experience reality raps. But my reality means my experiences from travel to relationships good and bad. My music is a positive remedy for those trying to progress in life.

Chad Rico:  My life experience makes my content different. I traveled the world but it wasn’t on a world tour. I was able to actually emerge myself in different cultures gaining a broader and much more impactful understanding of the bigger picture of the world. I knew a lot of people that participated in illegal activities but I didn’t. I really worked hard in school with the intentions that it was way I could succeed. So although the early experience may be similar to other artist it is from a totally different perspective.

Chad Rico:  I start with the beat. However the first song I wrote “Options” on the “Myth” EP came to me in a dream. I literally heard the hook in a dream, woke up and wrote it down and a couple days later I rapped it for my cousin who makes beats and he was like I have the perfect beat for that. When I make music it’s based on my emotions so I look for beats that will allow me to capture whatever I’m feeling.

Chad Rico: I have written all of my lyrics but I usually get my beats done from outside sources. However songs like “Click Click” I was actually there while the beats were made and I got to edit the beats while it was made keeping what I liked and taking out what I didn’t. I want to say I think some of the greatest songs are made from collaborations so featuring artist and being featured as well as collaborating on beats are all things I like to do.

Chad Rico:  When Yahoo Finance picked up my article. Honestly several business journals did as well. Taking on this career you don’t know who will acknowledge you and that was pretty cool for me. Also the EP reviews hearing how highly people thought of my music like the real breakdowns of every song was pretty amazing to me.

Chad Rico:  The passing of my grandfather in 2010. That was hard as he was the closest person to me in my life to pass away thus far. He was someone I would spend time with weekly. I can say school was hard but you endure it, then you get a degree. However when someone passes it’s not that silver lining – you have to adjust your life knowing you won’t see them on earth again.

Chad Rico:  Honestly at this point I like to think every song is unique. I do base them on how I feel but just like every experience in life is unique, every song is too. But with that being said the key ingredient starts with me and how I feel focusing on something that is real to me.

Chad Rico: Yes completely. In every way possible it has opened my mind. I am far less judgmental, experiencing so many cultures around the world. Although I still don’t agree with everything I see in world I understand better. Now I know the difference between agreeing and understanding. Most of my songs are based on my travel experiences, I have even written movie scripts about them.

Chad Rico: I can put out what I want when I want, this is what excites me most about being independent. The discouraging part is figuring out how to market your music. Like what is the best way to make sure you are heard when you do release music. Also what is the best time to drop music. So being open to suggestions from different veterans, although I am independent has help me with that.

Chad Rico: We also have Kam Kryz on Gold and Gems as well as several other artists and we will be working on a Gold & Gems tape that will be dropping late first quarter. Gold & Gems records launched this year. But Gold & Gems clothing launched in 2013 and we have been working hard on extending that brand ever since.

Chad Rico:  Yes I like that people are able to get there music out there to be heard. Not too long ago you had to buy a music from a physical store and there were only a few stories of people shooting music videos independently.  So I feel more people have a more of a chance now to make an impact in this industry and that’s cool.

Chad Rico: Calm, cool and collective. Some other keywords would be growth and the good and bad of being successful.

Chad Rico: I do feel it’s essential in building a career. Despite traveling the world and having all these experiences, I have been low key about them. So social media is interesting as people want to be part of your process and you should be open to that. I have an Instagram platform which I focus on the most. I’m still working on posting more regularly on Twitter and Facebook.

Chad Rico:  You can find it on all major streaming platforms Apple Music, Tidal, Spotify, Amazon Music etc. Also look at www.chadrico.com and be sure the click my Chad Rico logo to see updates on everything from shows, music and merchandise.

Chad Rico: I also have a production company Gold & Gems Productions. So I pride myself on the videos we put out. I think people will be really impressed by the visuals we have done for “New Level” and “ Workin”. We also did a visual for Kam Krzy song “Northface in September” So we will be dropping those soon and I am excited about all three of them. Furthermore, we have a debut film “Party Bus” that we are in the process of shooting and will dropping that trailer as well. They will be available on the chadrico.com and goldadngemsrecords.com page.

Chad Rico:   Yes I can. It has been a blessing to work with Haqq. Taking advice from him has definitely allowed me to progress at a rapid rate. The film “Party Bus” based on a true story on my life experience. We have a teaser for the movie finished and we are in talks with several companies about distributing the film. I’m excited to release the teaser for the movie as it was shot very well and will definitely have you laughing.

Chad Rico: I’m a creative so I’m not limited to one environment. I have written songs on the plane, in hotels, at home etc. I feel most creative after experiencing something. That’s why travel has become so essential for me. I love to perform live as well even though it’s pretty nerve racking right before I perform all the way until I’m supposed to say my first words – then it’s go time!