The Phlowers formed in 2007 in Phoenix AZ, and currently consist of Isaac Iris – (Vocals, Bass), Craig Catchfly – (Guitar, Vocals) and Reade Weede – (Drums, Vocals). The band have 3 releases to date and their latest album, “…Eh”, released this year,  is the culmination of a year-and-a-half long recording process with sessions taking place at various locations across the Phoenix metro area. From living rooms to garages, guest bedrooms, hallways, bathrooms, and rehearsal studios The Phlowers infused their eclectic mix of metal, punk, high-energy alt, and surf rock into each recording.

The snapping snare drum, the building electric guitar, the pounding drum rolls, and then a searingly vibrant wall of crashing sound that rises before your very ears. This is the start of “Waooo,” the opening track on “…Eh.” Opening with a dizzying bang this song serves as a perfect springboard into the heart of this album, which can shift in an instant between pulse-pounding (“Daisies” and “Cripplefight!”) and more progressive (“One Bad Motha” and “The Art Of Giving Up”). The vocal ranges stretch even to the eclectic (“Stick It In Here”), the dramatic (“Whale Tail”) or the catchy (“Gay [Not Sad]”).

Perhaps the most outstanding thing about the The Phlowers is their seamless blend of metal, punk, high-energy alt, and surf rock. The blasting electric riffs, high-energy melodies, and the whirling, sinuous guitars are all interwoven without so much as a sonic slip-up. At first glance, it seems like a fairly typical alternative rock album, but upon further listening, the alluringly complex arrangements begin to filter through. The lyrics aren’t for the prudish among you – angsty and outspoken, while avoiding all the trappings of clichéd-rock. 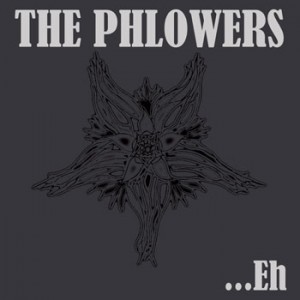 It’s difficult to find a musical flaw with the The Phlowers in “…Eh”. The vocals flip-flop between raging and wailing. Backing them up are Craig Catchfly’s layered, whirling guitar riffs, Isaac Iris’ carbonated basslines and Reade Weede’s controlled, fast drumming. The band truly revels in their crashing waves of sonic power and razor-sharp moments of hard-hitting guitars. You just can’t put this album on for only one song, because it’ll suck you right into the next one.

Fiercely adventurous, ruminating and expressive, “…Eh” is a breathtaking ride into a majestic genre-bending, alternative rock world all its own. This is a wondrous album to listen to in one long sitting. Give it some time and serious attention.