Sleep Keepers: “ROAR!” flirts with the concept of ever-changing timbres and sounds

Alternative rock band ‘Sleep Keepers’ has released the EP “ROAR!”, which contains 4 heavy dynamic tracks with elements of dubstep, female harsh screaming vocals and cipher-filled lyrics. The Ukrainian-based Sleep Keepers, consists of drummer Toshi, straight from the heart of Japan, the guitar player Ilya, from a war zone and lead singer Talana, from the capital of Ukraine. Even with cascading riffs, powerful vocals, and bouncing choruses, “ROAR!” enlists an underlining layer of trickery. Isolating these clever moments takes many listens, but inevitably adds incredible depth to the recording.

In a music industry plagued by clones and angsty teens trying to sound angry, vocalist Talana evokes the actual tone of the words she sings. For instance, whatever she sings, we as an audience can understand, sonically, her sensation. The delivery and distortion of Talana’s voice generates tangible visions of the lyrics. 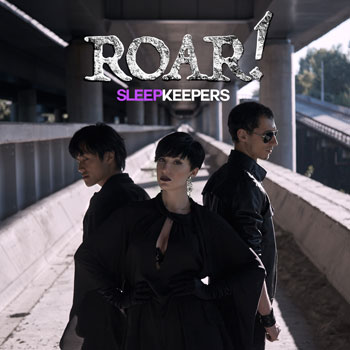 This furthers our attachment to the songs because we grasp the total sound and feel just as the band intended. It’s not sound for the sake of sound, but tone for the sake of emotion. You may hear hundreds of clichéd lyrics and singers trying desperately to sound emotional, instead of harmonizing the words with their enunciations. Talana confronts this concept head on and nails it.

A producer should always take bands in a new direction, in terms of sound. No one record should replicate another. The most meticulous engineered albums can still fall victim to sameness sometimes. Fans identify this easily and see it as a sidestep from originality.  I’m not sure who produced “ROAR!” but the result is unique because Sleep Keepers come off as heavy, yet incredibly transient.

Their archetype of sound can put listeners in a total trance, while at the same time explode with unbridled energy. They’re one of the few, new breed of alternative rock bands, to force fans to exist at a perfect balance. “ROAR!” flirts with the concept of ever-changing timbres and sounds throughout their tracks, going from electronic to electric, and from soft to loud, barricading listeners into some of the most emotional and driven songs in the genre.

Notwithstanding the fact that their arrangements are brimming with sonic onslaughts that arrive in multiple waves, nothing sounds cluttered or stagnant. The genius of Sleep Keepers’ songwriting comes in these ‘huge’ moments. The band centers on one or two key moments in each song to make it sound monumental and catchy at the same time.

They’re like signatures, sometimes enhanced through careful layered soaring vocal screams or ambient spoken word interludes. Instruments drop in and out to isolate what they want you to hear and feel. The most prominent of course, being Ilya’s guitars and the electronics, while Toshi’s drumming never fails to impress throughout.

You can sample all these goodies straight away on the opening title track “ROAR!” – and once the band goes full swing, at this level, their sound becomes rock art.

The overall pacing of EP is flawless. Sleep Keepers control the tempo, offering needed reprieves before plunging back into the fray. These intervals, although a bit slower is not short on impact – “Kindness Can Kill” is initially disguised as a reprieve, before it explodes into a wall of over-driven sound.

“This City Needs A Hero” functions anatomically, like circuitry of our hearts. Immediate electric bounces kicks off the record with a bang. Repeating riffs and musical cues amplify the track’s reverberations, as the harmonies and lead vocals soar, sweep and dip through the verses and choruses.

The song builds to massive melodic moments, before the instruments slowly drop out to only restart their journey again, carrying the song to even newer heights. “High Voltage” is comprised of fiery, thrashy guitar riffs, pounding drums, throaty screams, and chunky breakdowns.

The tracks on “ROAR!” open the ears and heart up to the variety of textures and feelings explored throughout. There are many undeniable high points on the EP, emotionally and sonically. These songs can rattle out the windows on your car on a regular basis as well as give you massive head to toe tingles, just by the turn of a volume knob.

All-round the music is melodic, hardcore, riffing, and a good mix of production and grit, while the lyrics are quotable, pertinent and insightful. Buy the EP even if you need to sell a kidney for it!