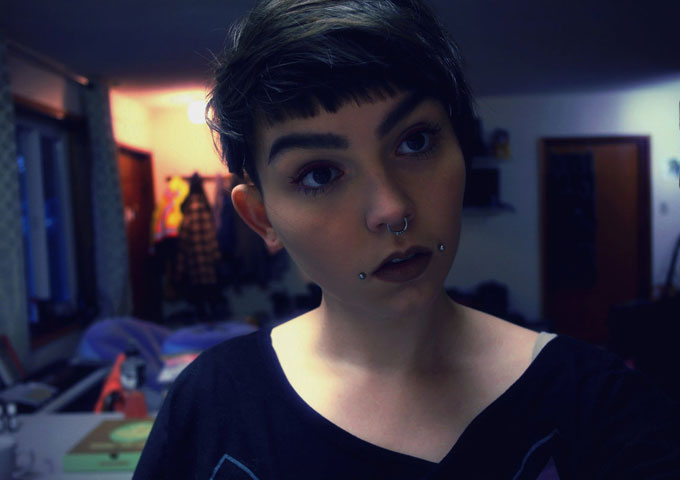 retrogress: “’naym waan” flows through your veins like liquid morphine

If you have never heard of this retrogress, but like mysterious, sultry, and deep music, running the gamut from dreamy vocals to psychedelic electronic, then maybe it’s for you. Sometimes people mistake honesty for pretentiousness and the album “’naym waan” is one very honest collection of songs.

I have no idea what this 22 year old aboriginal Canadian artist, making music out of their bedroom, has been through in her life, but I do know she is a profound and feeling individual that has managed to pour herself into this work. The album is truly a masterpiece of sorrow, pain, sadness, loss and discovery – it is spiritual, honest and at times devastating.

Listening to “’naym waan” is like having your worst fears confirmed and gaining peace of mind from acceptance: sometimes you just have to lie back and sink into the arms of despair, let it soothe you and go to sleep. retrogress’ voice is tremulous, fragile and pure, and seems to hold simultaneously the promise of eternal beauty and eternal sadness.

She is quite wonderful. If you’ve never lost a precious part of your mind, heart or soul, in the most unbearable of circumstances, you will feel as though you have after listening to songs such as “judgement”, “sadomasochism”, “tolerance” and “fervid”.

The themes of mental illness, abuse, and difficulty moving on, are full of dark, multi-faceted, interwoven melodies that transport the listener to deep within their own subconscious. The vocals have a mystical, morphia slow quality. Overall, this reinforces that dreamy, slowed down observation of time, which is undoubtedly a trademark sound of retrogress’ songs.

The overall effect is staggering. Far from sounding like dated dream pop from the early paisley underground, or lo-fi ambience, this album updates those sounds, matures it, and offers it with a totally different vision.

The funny thing about this ‘sad’ music is that it’s almost homeopathic in that, reflecting your emotions it makes everything else seem ok. Well, if not ok, at least better. Sadness often comes accompanied by loneliness, and through this oh-so-down music, retrogress offers the reassurance that you’re not alone in this.

The music and vocal performances here are incredibly intimate; this is not music that jumps out of your speakers; rather, its music that casts a spell through its pliability, its fragility, its restraint, and the way it flows through your veins like liquid morphine. It’s a sound where the vocals seem to be whispered straight into your ear, and where a single note echoes like the sound of thunder in the stillness of the night.