Field Of Giants: “We Are” – dense atmospherics and a hard-hitting rock!

Field Of Giants are a hard rock band from the UK. The band independently recorded and released their debut album, “We Are”, in November 2015. Since then the band has gained audiences from across the globe. To thank fans, the Field Of Giants has made 2 tracks available for FREE at their website: http://www.fieldofgiants.com.  Field Of Giants is amazing. They write complex, heavy, emotional music, which never sounds corny, and they can flat-out run a chill down your spine. This debut album is a straight, overdriven rock approach to their brand of music, which will capture a vast variety of rock fans. The one thing I can pick right out is that I like the guitars on “We Are”. It is used to great effect; keeping the flow of the songs together, and playing complicated and varied riffs.

The vocals too, are simply astounding: singing soft and beautifully, then conversely going all out and yelling. During all of the yelling, however, the voice is able to keep the high quality of its tone. That’s very rare to find these days. And last but certainly not least, the heart-pounding drums are able to pick a song up from a slow melody to all-out rage, and then slow it back down again. If Field Of Giants continue on the path that this album will certainly be beating out for them, this group will be something special indeed. 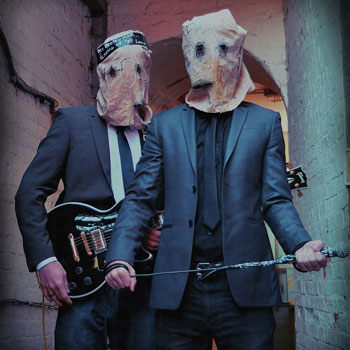 Actually, “We Are”, immediately impacts the listener with its solid rhythmic angle, the drumming style is absolutely mind-blowing and the tone is to die for. The meticulous grooves on “Let Go”, a song with a phenomenal atmospheric undercurrent that emphasizes tranquil passages, is filled with sporadic bass throbs, and glistening guitar work. The effective guitar expressions are in a league all their own. Field Of Giants’ music is riff-based, marked by plenty of visceral rock nuances, so you won’t find miles and miles of overblown guitar solos. The guitar work of Field Of Giants is simply one of a kind.

The verses and choruses of “Make My Day” are so well-written and infectious that it won’t let go days after you stop listening to it. And I really, really love the haunting lyrics. It conveys direct thoughts with zero pretenses, which, in my opinion, is a big plus. I wish I could describe each track in great detail, but it would be impossible to do so without missing vital moments. Though, at face value, “We Are” may seem a simplistic and concise grunge-induced alternative rock album, repeat listens expose great details. You may be as surprised as me when you start enjoying the numbing guitar drills on the bleak “Folded Paper” or effect-laden guitars paired with ominous instrumental interludes on “Back Door Theories”. This track is one of those cuts, where you hear so many changing chord progressions and vocal tone changes that your head spins.

“Untitled” is arguably the most brooding number on “We Are”, But it’s the slowly-picked guitar and the ever-expanding vocals of “Stay” with its dense atmospherics building on through its languid moments before venturing into a hard-hitting rock parts, which impresses really me. However, if it’s grinding relentless rock, with soaring, melodic vocals that you crave, then don’t miss knockout tracks such as, “Stay Awake”, “Waiting for Something”, “Fake”, “Forget Your Words” and “Hollow”. But truly each track, as well as the above-mentioned ones, resonates with vocal beauty and lyrical artistry.

Rarely does one find a band that speaks to listeners, on their debut release, like Field Of Giants does. Do yourself a huge favor and start listening to this wholly impressive and powerful band. However, be warned, everything else you listen to from that moment onwards may sound pathetic in comparison!