Matt Tiller: “We’re In This Together” – roaring riffs of rapturous satire!

Matt Tiller is a musical comedian, writer and television comedy producer behind shows like BBC ‘Two’s Hebburn’. Matt is working on a brand new album and has just released its lead single, entitled “We’re In This Together” – a driving comic indie-rock track about kidnapping George Osborne, Britain’s Chancellor of the Exchequer. The song has also spiraled into a short story, which has been published on Amazon. 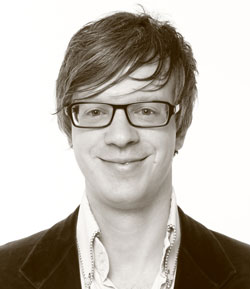 Beside the single, I’ve listened to a few of the songs from the upcoming album and every song could easily fit into any mainstream genre it’s aimed it. It’s one of those funny things, if you didn’t know English – you’d assume these were just some pretty nice pop songs. The lyrics are rich and playful, naughty and edgy, just what you’ve come to expect by now from Matt Tiller. The man is incredibly talented, and the addition of a female vocalist on some of his tracks is a great add-on.

The music is so well done that you have to really pay attention to catch all the lyrics because you’ll probably get caught up in the amazing tunes. Matt Tiller is so twisted…he thinks like I do. He starts out “We’re In This Together”, with this incredible jangly-guitar, pop-rock melody; he adds a honeyed voice and words of rapturous wonder to lull you into complacency then…WHAM…right between the eyes, out of left field, no idea it was coming, you get a double-dose of scathing perversity so stunning, you can’t stop laughing in time to catch all the words.

Matt is a talented musician with a gift for words. His crystal clear voice, accompanying guitar work and arrangements, if played as background music, could almost be mistaken for serious contemporary indie pop-rock. Once you realize what you are hearing though, the experience is changed for the better!

Matt is not only very, very funny, with a fine singing voice, but he has put together well-crafted lyrics and attractive melodies that make these songs a delight. The tracks generally start out pleasantly straight, then take a quick sharp turn into some very twisted territory. Even after you know what’s coming, they’re still a riot! This happens on my favorites, “Flat Packing Anger Management”, “Consensual Stalking” and “Rats”.

With his antihero looks and sharp wit, what makes Matt Tiller special, is his unerring ability to make any moment or situation ripe fodder for his biting humorous taint. To play some of his stuff to unsuspecting friends and family members and watch their reactions once they catch the lyrics is priceless!