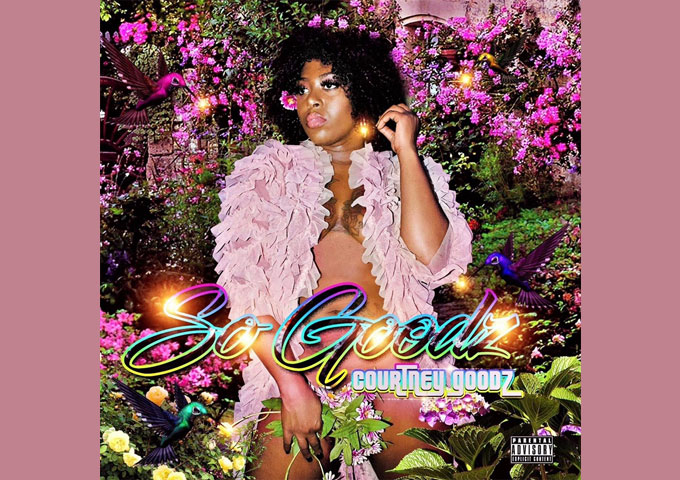 Courtney Goodz – “So Goodz” – Confrontational, sassy and uninhibited, she reigns supreme in her dominion

Courtney Goodz’s audacious knack for wordplay and her ability to go from chill to aggressive verses, cements her voice as what sets her sound apart. But it’s her biting and endearing personality that hails her as a budding star. Her lyrics are unabashedly sexual and are bursting with witty bravado. The highly anticipated 12 track project, “So Goodz”, packs a punch with infectious bets, stinging rap verses, and Courtney Goodz’s success in building dynamic soundscapes with hard-hitting lyricism. The Gary, Indiana rapper leans into her quirks and strengths, building on top of the outspoken foundation she has been constructing along the way.

On this album, Courtney Goodz’s launches herself into unexplored avenues, channeling her vibrant energy and vocal deliveries, while also doubling down on aesthetics and themes. The opening intro track “No Fake Shit” demonstrates Courtney’s confidence to say whatever she likes, which is confirmed with “Fuck U”. The song blends a clever mix of different styles, where the rapper is simply proving her ever-thriving versatility. 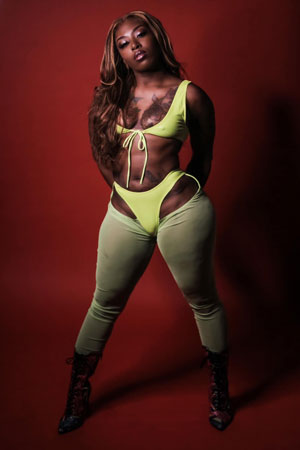 Courtney seamlessly switches between floaty vocals and skillful explicit flows over throbbing beats on “Get To Work”, “Greaselda” and “Pussy Reside”. Full of raunchy quips and risqué rhymes, the rapper trusts her artistic intuition and takes creative and lyrical liberties whenever she gets the chance. She is creative, adventurous, and scandalous, setting her own standards, while ignoring the industry’s pre-imposed boundaries and mainstream templates.

Throughout the album Courtney Goodz plays on her uninhibited sexuality ushered in by her commandeering vocal presence. On three very different sonic templates and themes, like “Nothing Basic”, “Winning” and “Trap Niggaz”, Courtney showcases precisely what she does better than anyone else.

Confrontational, sassy and uninhibited she reigns supreme in her dominion. On “I’m The Problem” she unleashes her abrasive aggression, leaving no question that she’s in control throughout the record.

“Check” confirms her self-confidence and outright cockiness, while “Opps” adopts a neck-snapping beat and stream of consciousness rhymes. It is relentless in its momentum and captivating in its execution. One of the best tracks on the album.

It is followed by the catchy “Tryna Get It” which features a number of melodic twists, showing yet another side of Courtney Goodz. From start to finish, on this album, Courtney impresses with her cheeky, creative lyricism and her unapologetic, unwavering attitude.

Layered with quips and bold statements, this album shows us an artist with confidence and assertion. “So Goodz” is an album that knows exactly what it is, and it’s the work of a well-crafted performer with something to prove.

Courtney Goodz is not like the other girls of the industry, she changes her flow several times executing every rhyme with true artistry and creating killer tracks along the way. “So Goodz” is a delightful 32-minute adventure into the mind of a fiercely liberated, ferociously tongued rapper.

Courtney Goodz is yet another example of the rapidly expanding, evolving world of female rap. For all its merits, “So Goodz” showcases a talent that is only starting to scratch the surface of what she is truly capable of being.