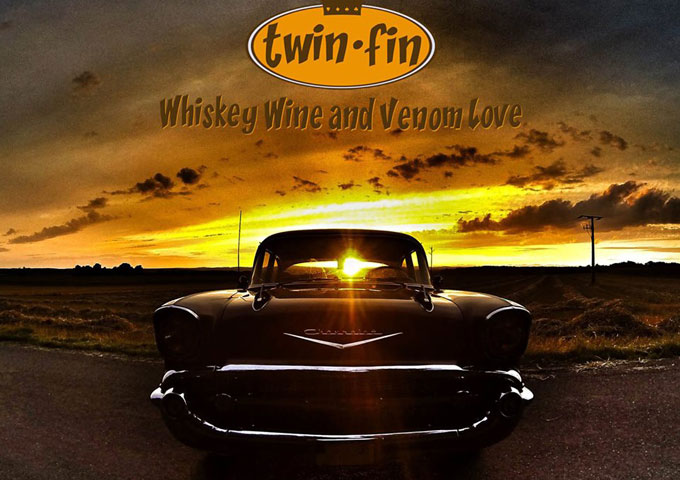 Based in London, Ontario Twin.Fin is 5 piece high energy Swing, Rockabilly, Blues and Jazz band. They perform original songs along with repertoire by Janis Martin, Louis Prima, Brian Setzer, and Tarantino soundtracks to keep the shows jumping. “Whisky Wine and Venom Love” is their debut album featuring 10 original songs, which was well received by local media with features in the Scene, The London Yodeller and most notably the London Free Press in James Reaney’s annual Top Ten Local Sonic Gems feature. 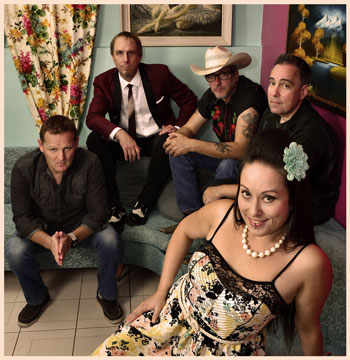 Recent nominations are CHRW Radio 94.9 ‘Album of the Year’ and the Jack Richardson London Music Awards ‘Best Artist’ in the blues category. All tracks were recorded at Higher Ground Sound and mastered by the Juno award winning Dan Brodbeck.

I love fusion bands, and I always have. When multiple styles click together and create a new, vivid hybrid, then there’s no other sound like it in the world. That’s also a good description of Twin.Fin’s full-length debut album, “Whisky Wine and Venom Love” – a mad mixture of stomp and swing, and who knows what else, as it spins without warning from one style to the next. And the energy and spirit make it all a really good kind of listening experience.

It opens with swinging jazzy snarl and polished sax playing in “Jungle Room” before exploding into a streak of call and response choruses. Just when it seems that they have settled into a signature style, they kick into “Devil Girl Stomp”, which is best described as snazzy rock n’ roll.

Dana Hartman has the right amount of crossover jazz sneer that you’d expect for such music, but she also doesn’t seem to be taking herself too seriously. She could fit into raucous rockers, swinging dance music, and a bunch of other genre-straddling song styles.

In a nutshell, don’t expect any of this to sound like anything you’ve ever heard. This is a wild, colorful patchwork of different sounds and styles – refreshingly smart and original.

The album also contains the song “Rocco Perri”, which has reached over 3 million views on YouTube, and is used as the musical backdrop for the Cherry Dollface vintage curly hair tutorial. The music is just so fun that every time you hear it, you’ll want to jump around the room like you’re at some crazy wedding party.

The band’s sound swirls like a tornado over generous amounts of saxophone from Cole G Benjamin and upright bass by Eric Roelofsen, layered in on a drum foundation courtesy of Brad “Lavard” Ondrovcik and guitar embellishing by Paul Wickerson and Dana Hartman. It all sounds heartfelt and natural, and you won’t regret throwing a mad party in your brain while these guys are playing through your sound system.

If you need to wake up your senses and shake yourself out of the tedium of everyday life, then press play on tracks such as “Let’s Get Drinkin’” and “Jalopy”. And if you need to catch your breath, then switch to “Straight Six and Four on the Floor” and “Won’t Let You Go”.

On this album you will find some of the best combinations of classic and retro music recently made, not to mention the combination of fun and meaningful – All done with a sense of professionalism and a dose of humor.