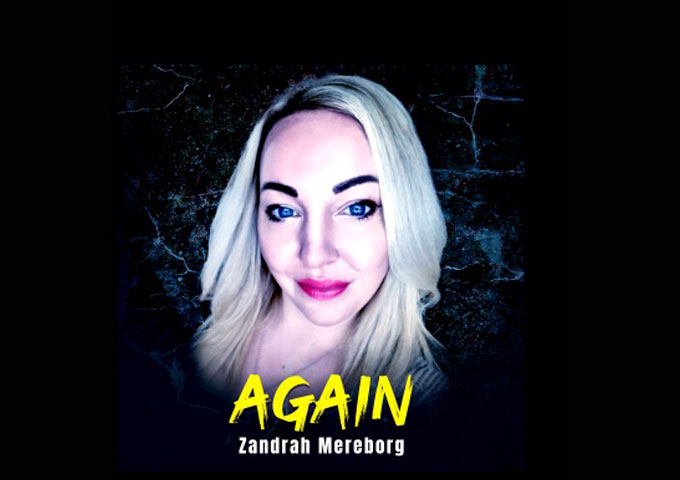 Released on the 11th March 2022, ‘Again’ is the latest single by Zandrah Mereborg, which was written in collaboration with Argentinian musician and producer Diego Gabriel Oviedo Bustos. With so many tools and talent at their disposal, this single is a masterclass in fragility and hope, lyrically and sonically, stripping it all back, but with a driving, hypnotic power pushing it forward. The idea of pushing onward, despite the difficulties, is woven into the fabric of the record. “Again’ is about a relationship that day by day is fading away and soon won’t be more than a memory. But at the same time, there’s a very strong spark of will, resilience and love that will fight and do anything possible to save the relationship.” explains Zandrah.

This is a record of evolving, juxtaposing moods and dynamics. As each verse flows into another like a stream of consciousness, dissecting the relationship. Sure, it packs some infectious, melodic motifs and elegant production embellishments, but there is so much more to unpack, with each listen peeling back layers of narration but also vocal dexterity and sonic adventure that retains a sense of warmth thanks to its subtle keyboard washes.

The record showcases a softer, more introspective side of the artist. And it’s arguably here where Zandrah Mereborg is at her most arresting. The song throbs with an understated edge of downtempo EDM and deep house danger, before blossoming forth into a chorus of pure electro-pop perfection.

This is something which not only adds to the record’s nuance and idiosyncrasy, but its depth and maturity also. And it is a mature record, one which explores every facet of Zandrah’s songwriting emotions, from her most vulnerable to her most resilient.

Fans will be able to both appreciate, and relish in, the nuance and musical maturity Zandrah Mereborg displays here. The elegant and thoughtful production allows Zandrah to employ the same poignancy in her vocal performance she delivered on her previous releases.

In fact, ‘Again’ presents itself to encapsulate everything Zandrah is as an artist currently. Its entrancing vocal textures and sedative, but rhythmic backdrop, affirm the mesmerizing elements of stunning otherworldly pop.

‘Again’ is a meticulously constructed track that showcases Zandrah Mereborg’s gorgeous voice and nuanced storytelling, which strikes a perfect balance between confidence and vulnerability, but also benefits significantly from producer Diego Gabriel Oviedo Bustos’ contribution. Bustos is able to weave rhythmic yet pensive foundations that linger in the mindset while at the same time feeding the soul. All of which confidently expresses and enhances Zandrah’s strengths

It’s fair to say that Zandrah Mereborg turns in a fantastic vocal performance. She has never sounded better in terms of controlling and understanding her vocal ability. She will have you feeling a whole lot of emotions as your process your own journey through life and love.

Together with producer Bustos, Zandrah has created a calmly powerful journey through the emotions of inevitable change. The two creatives mix the sounds of their previous singles together, and leave only the most heartfelt and captivating elements.

‘Again’ blends together everything that’s great about ethereal, otherworldly pop music, and compliments it with notes of downtempo EDM and powerful lyrics. ‘Again’ is a genuine soul-searcher for our times!