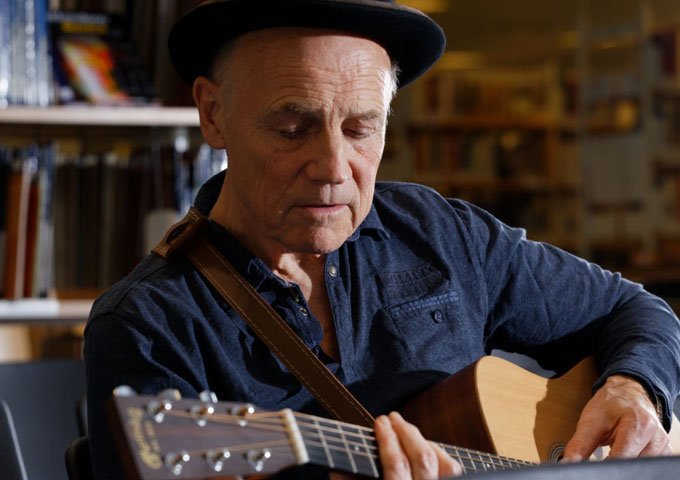 The essence of first-class songwriting lies in the art of telling a good story. And an example of convincing storytelling is to be found in the sad tale “Pain in Her Heart”, penned by Robert Metcalf, aka “Englishman in Berlin”. Metcalf – known to a wider German public as a writer of children´s song – addresses here an adult audience in his mother tongue. The single (available in most streaming services) and the accompanying video (YouTube) will be published simultaneously on 29 October 2021.

In his “songwriting project for adults” Metcalf has in the past frequently taken up serious topics, involving stories often told from an individual´s perspective. This time, too, the subject is serious, not to say oppressive; and as the song-title suggests, it´s about a young woman who is suffering from a deep-felt sadness, an inexplicable state that weighs her down and dominates her life. The video on YouTube offers this description: “It’s about a young woman – attractive, amicable, good-natured. But something is wrong, something causes her pain, and she can´t say why”.

With vivid lyrics Metcalf gives us an insight into the heartache and loneliness of this woman, who seeks an answer but finds none:

She´s been to the doctor, and what did he think?

And she thought: He´s probably thinking I´m a case for the shrink.

And he wrote a prescription for pills that she won´t take.

It´s worse in the night-time, she says, it keeps me awake.

To this story there is no happy end and even in the final lines no hint that the pain in her heart might soon disappear.

The music-video to the song – in which Aline Joers skillfully portrays the suffering protagonist – has been impressively filmed and edited by Hein Schneider. The result is a film in black and white, which convincingly captures the pain and suffering of the young woman and enhances the depressing message of the song.

In best “Englishman” tradition Robert Metcalf has employed only “real” instruments for the musical arrangement of his song: acoustic guitar, double bass, drums, organ and percussion, all played by hand and not overloaded with synthetic sounds. The backing vocals give the song additional musical depth, without sacrificing its simplicity and credibility.

Interestingly, the music is not as gloomy as the lyrics would lead one to expect, and this lends the song a special appeal. The video, too, adds an unexpected twist to an otherwise bleak, black-and-white portrait of the protagonist: in the last seconds of the film the bridge over which the young woman walks gradually changes colour, turning to its original red. Perhaps, at least here, a glimmer of hope?

Those who appreciate the art of great songwriting will discover in this song an excellent storyteller, who poses many questions but offers no answers. Rather, the songwriter captivates his listeners with a sad and simple tale, leaving them to ponder on the whys and wherefores. Metcalf is a master of his craft!

About Englishman in Berlin

No, he’s not from New York, as Sting fans might think, but from the German capital city. So, what is an Englishman doing in Berlin? And why has he been there so long – more than forty years?

Well, he started life in Birmingham, but as a young man he studied law in London and later moved to Paris, ostensibly to do international studies, but it had more to do with learning about life. Three years later he was heading further east, landed in Berlin, and became a social worker, for many years counselling drug addicts.

Then the Berlin Wall comes tumbling down and the next thing we hear from him he’s writing German songs for children, even – and still! – appearing on German television, winning a prize or two and performing in some of the country´s best known venues.

So far pretty good. But why does he call himself the Englishman in Berlin, and what does the „Light, Medium and Strong” bit in the subtitle mean? And how come he´s writing songs all of a sudden? Come to think of it: what´s his real name, anyway?

Robert Metcalf – that´s his real name – first got into playing an instrument back in his Paris days, when he discovered that his French roommate had an old guitar. And, you´ve guessed it: Robert taught himself the basic chords, started to learn a few Beatles´ songs – and was hooked.

Only when he had been in Berlin for some ten years did Robert´s talent for actually writing songs evolve, first in his mother tongue, then – more by luck than judgement – in German. Soon he forgot his former ambitions as a lawyer or social worker and decided to get into songwriting professionally.

Several years have passed, successful years of writing and performing for a young German audience. And now we find Robert making a sort of musical U-turn: Back to the roots! He still has a guitar in his hand, but now he´s writing and playing English songs for adult listeners.

And they´re great songs, sometimes thoughtful and philosophical, sometimes witty and entertaining –with a touch of English humour not far away. You can hear him either on the internet or in live performances, in different line-ups: “light” (as a soloist), “medium” (with his duo-partner) or “strong” (with his band).

… So now you know the story…And now it´s time to get to know Robert´s songs!