Rarely does a musician have an excuse to take ownership of our ears for more than four minutes per song. There are a few artists who have the imagination to write beyond an enticing hook that becomes cacophony after a few turns on repeat. Enter Aaron Lindstrom’s ballad, Queen Anne. With an eight-and-a-half minute duration, listening to this piece of music seems like a big commitment, but wait a while, give it the license to change your ears and your mind. This is a lyrical story traveling through time, space, and genres.

Written over the course of several years and miles logged, a few desperate heartbreaks and six too many shots of whiskey, Queen Anne begins as a folk love song, sweet and subtle, acoustic and soulful. You’re transported to Seattle, gaze over the steam of fresh-brewed coffee upon the love of your life. A piece of electric guitar pulses through the cords to trace the beginnings of this phantom love story. Then… it pauses. It starts again.

Lindstrom’s fresh vocals fill the void with harmonies reminiscent of Paul Simon. Then… it breathes and begins again. And you’re transported into an entirely different venue of jam-band essence and an incendiary electric guitar solo that brings this ballad to a finish. By the end, this sweet love-story is drenched in resentment and heartache, all dripping from the frets. 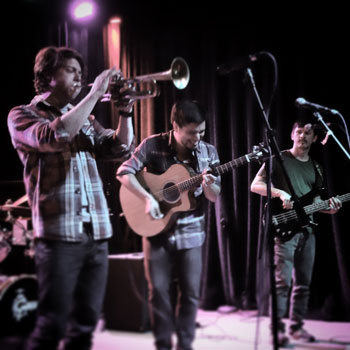 It’s a bold move. There are at least three songs embedded into these prolific eight and a half minutes melody. There are at least two musical genres threaded throughout. And putting in multiple pauses? Yeah, it’s not a safe move on the part of a musician. But it works.

Aaron Lindstrom is not a stranger to lyricism and he’s not afraid to use it. He bleeds the first 30 seconds of the song so prolifically that you won’t even notice the pauses or mind the time. It’s sweet and salty and complex. Its seduction is worthy of the time needed to be contemplated/understood.

There is a dearth of songs that are powerful enough to give you pause. Lindstrom forces you to pause; with rich and robust lyrics taking you across Montana, San Francisco and back to the Pacific Northwest. You need a fade to black to breathe it in, and here is a song with so much attention to detail in each note that Lindstrom gives the listener space to fade up and poised for more as he transitions between styling’s and spaces.