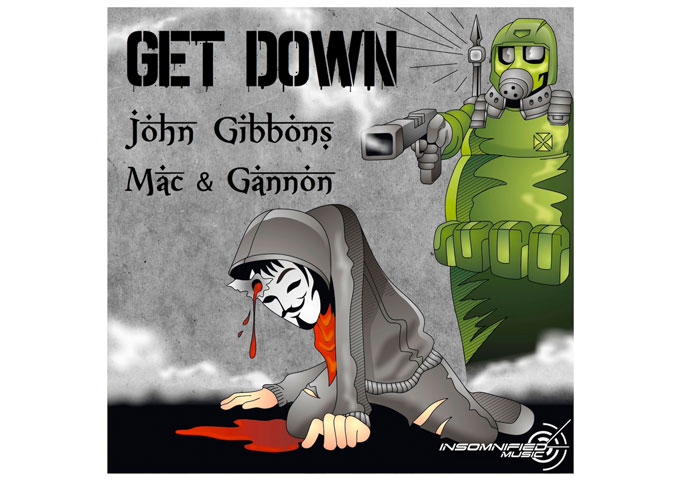 John Gibbons, Mac & Gannon: ‘Get Down’ – EDM with a highly creative spirit and a great feel!

An energetic and skillful infusion of all their musical influences.

Irish producer John Gibbons teams up with mega-talented newcomers Mac & Gannon for ‘Get Down’, out on the Insomnified music label. Gibbons initially rose to international prominence as a DJ under the stewardship of Mark Reeder of infamous Berlin label and management company MFS, with world-wide DJ appearances spanning six continents and a loyal fan-base developing globally in countries from Ireland to Brazil via Eastern Europe, the USA and everywhere in between. He has scored notable success with dozens of remixes and original projects on a myriad of international labels. Gibbons also produces and presents Ireland’s biggest dance-music radio show ‘POWER’ as well as being the producer and host of ‘Alchemy Radio’.

Inspired by the vibrant sound of Melbourne’s Sparks & Deorro, Irishman Paul Gannon’s style is also bouncy but with a more soulful bass, crisp and clean undertones and direct and sharp melodies. From big gigs mixing it up with the best in this big land to even bigger gigs in much smaller countries, Paul wants to bring his unique sound and mixing style to every corner of the music world. Describing his best gig ever as being the support act for Ireland’s biggest DJ’s Karl Mac, Paul knows it’s a cross between his talent and an energetic crowd that gets the night pumping.

Karl McDonnell aka Karl Mac is one of the foremost rising talents in the dance music scene in Ireland. Karl is well known for his energetic sets, mash-ups and the charisma that he brings to the decks on a regular basis. At a young age Karl knew that he had an ear for the progressive genre. Since then he has tirelessly dedicated himself to building a dedicated fan base off the back of his own uninhibited love for dance music. Karl Mac is a regular fixture at some of Ireland’s hottest clubs including his current residency at Lafayette’s.

These three can move a crowd like no other and it shows on ‘Get Down’. They have creativity that cannot be taught or replicated. These guys find a way to transform the sound and set trends way ahead of the crowd. John Gibbons, Mac & Gannon display true talent in producing, song composition and melody creation on this track.

Many people always look with aversion upon artists who create dance music. It’s almost as if they believe dance music automatically flows out of a laptop or sequencer. The creation of dance music has evolved and successfully creating within this genre takes effort and a high level of creativity, to compete with the myriad of producers out there. John Gibbons, Mac & Gannon with ‘Get Down’, have a product of a highly creative spirit and a great ‘feel’ for the right sounds and moods needed to fill a dance-floor.

I am nothing short of amazed at the talent John Gibbons, Mac & Gannon have displayed in this energetic and skillful infusion of all their musical influences. ‘Get Down’ has it all, ranging from thumping basslines and smart breaks, to the sounds of progressive and techno to trance and beyond. They drop every boundary line that exists in EDM and crossover into the electronic highlands!

If you haven’t bought this one yet, ‘Get Down’ and get on it now!