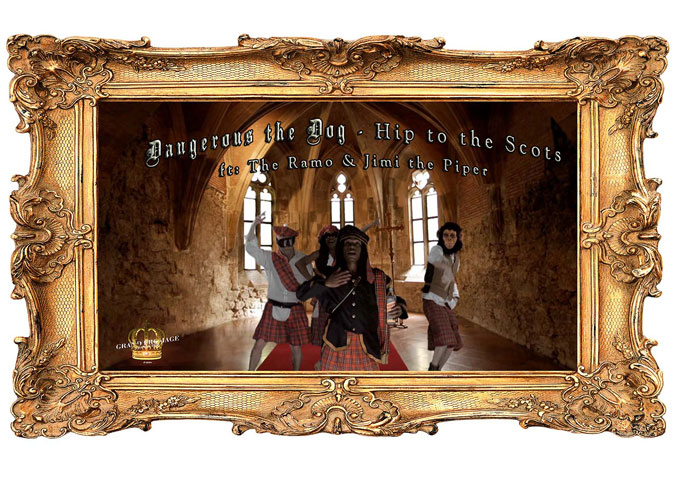 Dangerous the Dog: “Hip to the Scots ft: The Ramo & Jimi the Piper” – A Unique Rap Track Indeed!

‘Hip to the Scots’, is a multi-national phenomenon, which was initially conceived by two eccentric and reclusive European Grammy/Oscar award winning producers, who were experimenting with Ableton Live and Native instruments… (particularly the bagpipes)… Further inspiration then came from the exclusive Parisian production house Grand Fromage Productions (GFP) and their resident Hip Pop producer Dangerous the Dog, who were both enchanted by the tune and its obvious global potential.

Together with GFP collaborator and vocalist, The Ramo from Greenville, South Carolina, USA, and through their extensive global contacts, the creative team at GFP’s satellite office in Edinburgh, Scotland were awoken from their whisky-induced slumber and were able to arrange for the legendary Jimi the Piper to record the bagpipes at the infamous Abbey Road studios in London. Jimi was the perfect choice. A piper from the age of 10 he had already achieved major chart success in Europe and Asia & having been invited twice to bring in the New Year celebrations in Beijing, China to an audience of over 1 x billion avid fans.

‘Hip to the Scots’ is indeed a unique track. The Ramo is very versatile in his rapping and you can tell by this single, he can rap about serious things and also can rap about funny things, just as much as he can switch up his flow which could soon make him a contender in the game. The “theatrical” concept of the single is aimed at the “novelty”  seeking crowd and it does not fall short.

The production of ‘Hip to the Scots’ is top-notch from living legend Dangerous the Dog of Grand Fromage Productions. You know it will get the clubs popping because it has so much energy and the Bagpipe interludes are just straight hotness, while The Ramo gets in with his rhythmic flow and completely rips it. Not to mention that the chorus is one of the catchiest of the year. You will definitely be singing along on this song.

This track is handmade for riding and nodding too. It comes off the blocks running from the first bars. ‘Hip to the Scots’ is how a fun rap track should be done; a perfect fusion of beats and rhymes, together with a catchy vocal hook and unique Scottish theme, creating a swashbuckling arrangement to play on repeat.

If you want consciousness then pick up The Roots, Mos Def etc. If you wanna ride out and enjoy some clever lyrics, a hot beat and a novelty theme, that you’ve never heard done before, then pick up Dangerous the Dog’s  ‘Hip to the Scots’ ft: The Ramo & Jimi the Piper.

MORE ABOUT DANGEROUS THE DOG:

Mr Dangerous aka Dangerous the Dog, born Luis Miguel Arrondo (birthdate unknown) is a Mexican – French – composer, producer, conductor and songwriter. Arrondo was born with a congenital form of Hypertrichosis (also called Ambras Syndrome). Many cases of Hypertrichosis have informally been called Werewolf Syndrome, because the appearance is similar to that of a werewolf.

Found wandering alone in the Sierra Madre mountains of Northern Mexico by a local goat herder, Arrondo was raised by the Carmelite Sisters of the Divine Heart of Jesus in an orphanage in Chihuahua. One of the nuns, who Arrondo refers to as ‘Mama Two” recalls that “Many of these children are abandoned to wild nature according to local custom. For those that do manage to re-assimilate, historically the only route open was to find employment in a circus, often as a freak. Thankfully it was Arrondo’s musical ability that saved him from this grotesque fate.”

The story goes that one evening the Mother Superior was listening to Herbert von Karajan conducting the Berlin Philharmonic. The piece was Tchaikovsky’s Piano Concerto No 1. The next day, to her astonishment, she came across the young Arrondo, sitting at a piano, playing the piece, intact, from memory.

“According to the Mother Superior it was not only technically perfect; this child was playing it –as if being conducted by von Karajan himself. Quite astonishing.”Through her contacts in the Church, the Mother Superior sent Arrondo to be professionally assessed by Francesco Buitoni, a Visiting Professor of Music from the Milan Conservatory (Conservatorio di musica “Giuseppe Verdi” di Milano)

Struck by his precocious talent, Buitoni, adopted the young Arrondo and relocated him to Milan. “Studying at the Conservatory proved very difficult for me” recalls Arrondo, “children can be very cruel. The local kids used to refer to me as “Dogface”…however Professor Buitoni was very kind and tutored me from his own home.’

It has been suggested that before being found in Mexico. Arrondo was a feral child, raised by wolves.

“It is true that the area I was found is home to a large number of ‘El Lobo’ a subspecies of the Grey Wolf. However I have no memory of this time at all. Subsequently though, at Professor Buitoni’s behest, I did undergo Regression Therapy under hypnosis. In this state I did recount drinking milk from a female wolf and also these wonderful creatures lying on top of me to keep me warm at night. Whether these events actually occurred or are false memories I cannot say for sure. But I have always had great affinity for the pride and majesty of the wolf”

Arrondo, during his public appearances has taken to wearing his signature dog head, specially made for him in Beverly Hills. “This was an idea from Zazu Picasso & Snoop Dog. They suggested rather than creating a psychological turmoil within myself, I should celebrate and show solidarity with what I consider my canine roots. If by some chance I was raised by a She Wolf – whom I refer to as Mama One – then I must not deny this fact – or her early nurturing of me.”

Zazu Picasso, Snoop Dog & Wiz Khalifa are also credited with encouraging Arrondo’s move from classical music to contemporary music. This was not an easy transition for Arrondo as his first foray into Hip Hop, “Pause. Pause. Replay. Padded feet. My Darling Clementine” had been panned by those critics who allowed access. His second track “Fur” fared no better.

“Zazu, Wiz, Jay-Z, Kayne, and I were out clubbing in Paris one night. I was drowning my sorrows because of the critical reaction and was considering going back to classical composition. They just looked at me and said ‘Man, the past is dead, the future still to be born. What is here now is the now and there is only the now. Now is your time. Listen around; what you hear today is the music of now. Listen, learn, mash, recreate and elegantly and with profound dignity take your place.’ And to be honest I’ve never looked back. That night I went home and wrote “Hip to the Scots” “When Will My Heart Be Free”, “Pussy on the Wall” and “This Day.” 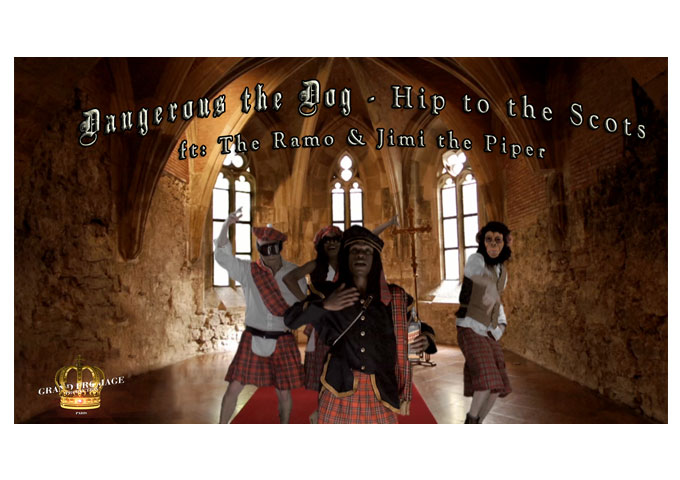