LATEST NEWS
GMT+2 16:33 PM
Home Twenty Questions Interview: Jack Travis is not one for a lot of colorful words and shiny packaging

Interview: Jack Travis is not one for a lot of colorful words and shiny packaging

Jack Travis is not one for a lot of colorful words and shiny packaging. “I wanna bring some true spittin back to the game,” he says. An Alabama native, Jack Travis spits aggressive and uncompromising lyrics rooted in his Southern upbringing. A fresh face in the hip hop world, the Atlanta transplant takes the diction of the rap game to new heights with engaging metaphors, similes and analogies that fuses his humble beginnings with pop culture. Influenced by the rap culture of the mid to late ’90s Jack Travis is set to challenge today’s hip hop competition. Not only with the lyrical side, He produces and engineers much of his music.

Jack Travis: I released my first piece of music in Sept. 2011. I’ve always had an ear and interest in music, from crying for a drumset when I was young to lying beside the jambox all night waiting for the right songs to record on my cassette tapes a couple years later. Although, my original plan for moving to Atlanta was to create a record company and a cousin of mine was to be the “rap star” but that didn’t work out as planned and I soon saw that the talent that I saw in him could only be bested by me and certainly not any “artist” that I was running across. All that came together, to bring about my rap career.

Jack Travis: I’m a fan of music period and can remember all sorts of music from the past but the 1st song to catch my attention was from “The Pharcyde” “Passin Me By”, 1st CD I ever bought was “A Tribe Called Quest”, ”The Low End Theory” but ultimately Outkast and that whole Goodie Mobb/Dungeon Family movement got me.

Jack Travis: I wouldn’t say necessarily “resistance” it’s been more of an “unwillingness” as far the certain people that one would like to be interested. Here in Atlanta it’s more about “who you are” than “what you are/trying to be”. With that said, I haven’t had many people that had something bad to say about my music. I have certainly heard that production, engineering, etc… could be better. A hater will bear the wrath… A constructive critic will get a salute.

Jack Travis: ABSOLUTELY. In fact, these days a good visual representation can get you just as noticed as a hot song. Here’s my most recent video http://bit.ly/1iBywh2

Jack Travis: Aside from being an artist, I also produce. My previous efforts have been an mixture of both my and outside production. Recently I began engineering my own music. I’m open to outsourcing, but at this point my musical journey has dictated I do most of it myself.

Jack Travis: The fact that I am an artist first and foremost, in a time where these “Newcomers” are merely rappers. In my opinion that gives me the “special sauce” to out cook the competition. 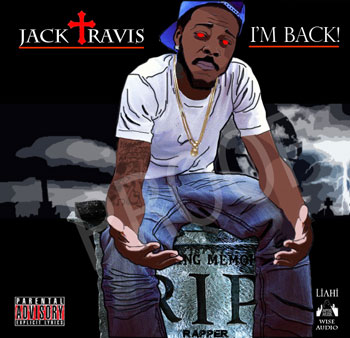 Jack Travis: For me it’s passion. I’ve always had an obsession and a difference when it came to listening to music I knew i heard nuances, and was captivated by it. I can do many things in life but my passion for music overrides it all.

Jack Travis: It’s funny… just that. The fact that I’m an indie artist is exciting because in theory that means more money in my pocket, but at the same time being an indie artist is the most discouraging because that means I literally have to fund the campaign myself and hope that it catches on because if it doesn’t I don’t have a machine in my corner to pick up the slack.

Jack Travis: At one point not too long ago, I had to manage everything myself, here lately though, I’ve been fortunate enough to run across a couple of people that are lending their assistance in expanding my visibility in this here rap world.

Jack Travis: Private studio for the most part but I do have access to a couple of post production studio’s that I use for the final listening sessions.

Jack Travis: The best piece of advice I’ve followed so far is don’t stop, stay consistent. The piece of advice that I didn’t follow and wish that I should have from the start was invest in yourself. I was too busy looking for people to invest in me.

Jack Travis: I definitely think it’s important but I do realize how easy it is to fake an image and also how vital it is to have a real core fan base that you can touch.

Jack Travis: With the way I’ve seen individual trophies downgraded lately due to maybe not the most deserving artist winning… they don’t hold as much importance. Standing on the stage with a crowd full of people chanting my name and lyrics is what I dream about constantly.